The incredible views from the summit of this giant tabletop of a mountain paired with a rather technical scramble along its hair-raising Striding Edge route, make this an adventure-packed hike in the picturesque Lake District National Park. In this post, you’ll learn more about the route we took as well as our tips for taking Striding Edge on.

Although one of the most well liked hikes in the UK, walking Helvellyn is a challenge that should not be taken too lightly. This mountain stands tall at 950 m (3,117 ft) above sea leve & in this post we will be covering the Striding Edge route but whichever route you choose you’ll need a pretty good level of fitness to tackle it.

Due to the sharp ridges of the mountain, which were carved by glaciers during the last ice age, there will be at least some climbing involved, from whichever angle you decide to take Helvellyn on. Via the Striding Edge route, however, you are looking at the most popular Grade 1 scramble in the Lakes.

How Long To Climb Helvellyn?

For most Helvellyn routes it takes around 3-hours to get to the summit.

The route that we took, along Striding Edge & back down Swirral Edge, was 14.1 km (8.7 miles) & took us around 5 1/2 hours in total with stops. On the way up gaining 790 m (2,592 ft) of elevation in 7km paired with the climbing made for a moderately strenuous hike. Coming back down, however, is a lot easier, although climbing down Swirral Edge still requires concentration & control underfoot.

Villages don’t get much more quintessentially Lake District than Glenridding, nestled right at the southern end of Ullswater, it certainly boasts spectacular views.

In Glenridding itself, there is a selection of holiday cottages, a campsite, a pub called the Travellers Rest Inn, a small shop & a tourist information centre. The surrounding mountains make it a great base & starting point for tons of hikes in the area, the most popular being Helvellyn.

We chose to park up about 1/2 mile out-of-town – taking the road towards Penrith we found a lakeside parking spot & walked back towards Glenridding to pick up the trail to Helvellyn. There is also a large Lake District National Park Authority pay & display car park in Glenridding itself.

From Glenridding, we headed past the Travellers Rest Inn & took a left towards Gillside Farm campsite. From there we followed the path upstream & carried on turning left until we reached the stone path which led us steeply up, stopping occasionally to take in the stunning views of Ullswater which got better & better the higher we climbed.

From here we followed the stone wall until we reached the stile known as ‘ The Hole In The Wall’ (literally naming it for what it is!), which we passed through to reach the start of Striding Edge. Staring up at the very narrow edge that leads to Helvellyn’s peak, I (Kelly) have to admit, my fear of heights did start to kick in.

After following Striding Edge to the top of Helvellyn we then looped back down the other side & scrambling down Swirral Edge, taking the path that follows Red Tarn Beck, onto Greenside Road, all the way back to Glenridding.

The whole route is very easy to follow with the trails being very well maintained. For maps, we used Maps.Me with this post detailing exactly how to use the app for hiking. The route that we mapped out beforehand is shown just below. Ordnance Survey, however, does offer maps that are much more accurate for walking & hiking, having an app with an offline maps feature & of course paper maps if you’d prefer not to rely on your phone.

The ascent itself requires a bit of stamina but is not what we’d call super hard. The paths on this route are in very good condition which always makes for an easier walk. To be honest, with a big chunk of the ascent to Helvellyn being along Striding Edge it requires more mental concentration than physical steam, with the last few hundred metres being a steep climb to reach Helvellyn’s peak.

Striding Edge is a technical scramble that requires you to pay attention throughout – there’s a plaque en route that commemorates where artist Charles Gough fell to his death in 1805 & there have been more people who have suffered the same fate since. No scare tactics are meant here though, we survived to tell the tale & just want to point out the risks involved & share a few safety tips for anyone thinking of taking Striding Edge on.

To keep yourself safe, we would recommend going at your own pace. I (Kelly) for example am quite fearful of heights so took Striding Edge a lot slower than Adam. I stopped to let others on the trail pass me by, which gave me more confidence to move at my own speed & enjoy it.

We would definitely not recommend attempting this route in bad weather, especially if it’s windy. Be sure to check mountain forecast for updates on the weather atop Helvellyn.

We’d also say that attempting to walk along Striding Edge without proper footwear, would be quite silly, proper hiking boots or runners are needed if you are going to take this on. Check out our post on hiking safety for more tips.

At The Summit Of Helvellyn

What makes Helvellyn so magnificent is the amount of flat open space at the top, in fact, in 1926 an aeroplane attempted to land on this fell, succeeded & even managed to take off again… so if you fancy running around in giant loops to celebrate your ascent, rest assured, there’s plenty of space.

After tackling Striding Edge we took a while at the top of Helvellyn to just take it all in. The views from the summit are incredible, 360 degrees of mountains & lakes with three deep glacial coves & the two sharp-topped ridges of Striding Edge & Swirral Edge all clearly in view. On a clear day, it is believed that you can even see across to the hills of south-west Scotland, the Pennines & even the Blackpool Tower.

Although Swirral Edge is nowhere near as tricky or challenging as Striding Edge, it still requires some concentration. You can choose to take a detour to CatsyCam although we didn’t go for this option & took the long winding path that follows Red Tarn Beck which made for a lovely loop back into Glenridding.

A Summary Of Walking Helvellyn Via Striding Edge

Coming from someone who is afraid of heights, taking the Striding Edge route to Helvellyn, is most definitely worth it. Scrambling adds new depths to a hike, making it mentally as well as physically demanding & for Hellvellyn, this was certainly the case.

For quick reference we’ve summarised the route we took below…

If you’re looking for more hiking guides & inspiration, be sure to check out our nature & adventure page.

Thanks for reading, if you do hike Helvellyn via Striding Edge we hope you have a really awesome time,

Pin me for later

about the wilder route... In 2017 Kelly & Adam Peck embarked on a journey that would change their lives forever...

Equipped with a couple of second-hand bikes, they took a one-way flight to Havana, Cuba &, after a cycling escapade that took them over four hundred kilometres - through remote villages & untouched landscapes, the roots of The Wilder Route were firmly planted.

From there the adventure was destined to continue... this intrepid couple spent the next 10 months soaking up the vibrance of Mexico, hiking up volcanoes in Guatemala, taking in the wild scenery of Canada & experiencing the beauty & diversity of Colombia, before eventually returning to the UK.

With the feeling of exploration in their souls, Kelly & Adam knew that they wanted to build a life that brought them closer to nature, a life that made adventure part of their every day. Selling most of their belongings & packing the rest of what they owned into their tiny home on wheels, van life became the next step of their journey.

Since moving into their motorhome in 2018 (a Bessacar E560 named Barnaby) they have experienced many more magical moments, built their online business on the road & have even planned a wedding & said "I do" along the way.

Featured in publications such as Wanderlust Magazine & Housesitting Magazine & speaking at events such as Destinations Shows, Borderless Live & The Caravan & Motorhome Show about living a location-independent lifestyle - they are passionate about helping & inspiring others to explore, to connect with nature &, to live alternatively.

New to the wilder route?

any questions or comments? drop them below...

This site uses Akismet to reduce spam. Learn how your comment data is processed. 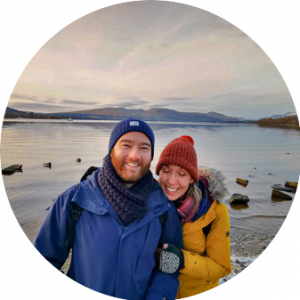 We’re Kelly & Adam, a couple of wild souls, who live alternatively, amidst nature.

Covering our travels past & present, The Wilder Route brings you our experience & advice. Our passion lies in helping free-spirited folk, like you, to explore more & to connect with nature.

From our incredible adventures across four continents to our day-to-day life as full time van dwellers – rest assured fellow wild soul, there’s plenty here to keep you inspired. LEARN MORE ABOUT US>

Inspired by nature, design by us. SHOP NOW >

Looking for something in particular? THE WILDER ROUTE NEWS
A monthly round-up of our van life, travel, adventure & nature-inspired content, straight to your inbox.
EXPLORE THE ARCHIVES
We use cookies to improve your experience. By continuing to explore, you are agreeing to accept them. OK Read More
Privacy & Cookies Policy

This website uses cookies to improve your experience while you navigate through the website. Out of these cookies, the cookies that are categorized as necessary are stored on your browser as they are essential for the working of basic functionalities of the website. We also use third-party cookies that help us analyze and understand how you use this website. These cookies will be stored in your browser only with your consent. You also have the option to opt-out of these cookies. But opting out of some of these cookies may have an effect on your browsing experience.
Necessary Always Enabled
Necessary cookies are absolutely essential for the website to function properly. This category only includes cookies that ensures basic functionalities and security features of the website. These cookies do not store any personal information.
Non-necessary
Any cookies that may not be particularly necessary for the website to function and is used specifically to collect user personal data via analytics, ads, other embedded contents are termed as non-necessary cookies. It is mandatory to procure user consent prior to running these cookies on your website.
SAVE & ACCEPT
Share via
Facebook
Twitter
LinkedIn
Mix
Email
Print
Copy Link
Powered by Social Snap
Copy link
CopyCopied
Powered by Social Snap